First, the bad news when it comes to Software as a Service in 2018: The market is maturing. Growth is expected to cool a bit. And artificial intelligence, according to one report, is threatening a key pricing model that cloud software is built on.

But there’s good news, too. For one, SaaS providers are baking that same AI into their apps, making them smarter and more useful, analysts said. Meanwhile, despite projections of a more sober market, a lot of companies are expected to move their software systems into the cloud, which means there’s still plenty of room for growth.

Gartner analyst Jay Heiser said it won’t be long before virtually all applications live in the cloud instead of on local devices or local servers.

“We’re halfway through a 40-year journey and nobody knows what the endpoint is going to look like,” he said, adding that computing two decades from now will look “just as foreign to us” as using a web browser seemed back in the 1990s.  “If it’s weird now it’s going to get weirder,” he said.

2017 was the year that Software-as-a-Service (SaaS) — those apps like Salesforce’s Sales Cloud, Microsoft’s Office 365 and Google’s G Suite that live in the cloud instead of on your hard drive — grew up. Big software companies like Google and Microsoft demonstrated they could deploy SaaS apps in the enterprise. Smaller SaaS companies like workplace collaboration app Slack showed they could generate revenue — Slack said it now tops $200 million in annual recurring revenue, with 2 million of its 6 million daily users on paid plans.

Now, analysts are painting a mixed picture for 2018 where a maturing SaaS marketslows but doesn’t stall and there’s still room for plenty of continued adoption of cloud-based software.

SaaS is expected to continue growing in 2018, but at a slower rate. One reason: Many enterprises have already adopted SaaS solutions, especially when it comes to customer relationship management (CRM) and human capital management (HCM) as well as financial applications, according to Gartner.

All of this means the SaaS market is entering a new, more mature phase, analysts said. A lot of enterprise customers have already done the easy work — identifying apps that can be smoothly converted to a cloud model — and they’ve gone ahead and transitioned those apps to SaaS offerings. 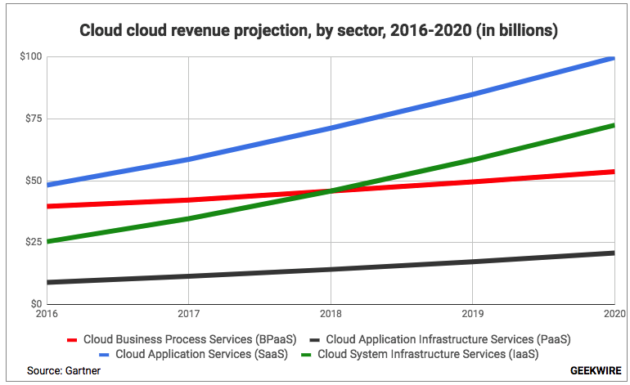 Now comes the harder part. In 2018, those same customers are going to be evaluating how to move their bigger software systems — such as Enterprise Resource Planning (ERP) and supply chain applications — to SaaS.

It’s those big enterprise systems that will fuel some of SaaS’s strongest growth in the coming year, IDC said.

Still, Heiser, the Gartner analyst, said several sectors have been stubborn about adopting SaaS — hospitals and manufacturing, to name two. The reason: Those customers remain fearful that SaaS systems could go offline, shutting down medical systems or factory floors, Heiser said. “If it’s a hospital, people are going to die,” he said.

That means SaaS will likely conquer other systems in those markets — patient billing and CRM — before it gets near those more critical domains, he said.

Additional SaaS growth areas over the coming year include back office systems and systems of record, Heiser said. “It’s going to be more explicitly embraced by the IT department,” he said.

In addition,Heiser said, expect SaaS systems to become more complex, morphing into Platform as a Service offerings as enterprises demand more flexibility from cloud-based apps that can be easily customized.

The rise of artificial intelligence

Artificial intelligence will change SaaS offerings significantly in the coming year and beyond, analysts said.

For one, AI is starting to threaten SaaS providers’ pricing model, according to a Gartner report released last year. As more customers deploy their own AI, there will be fewer employees using the software, which means less revenue for vendors who charge on a per-named-user basis, the report said.

Gartner illustrates an “increasingly common” scenario where a top e-commerce firm cuts its staff and deploys chatbots for some but not all customer service. The question becomes, can SaaS providers charge for chatbots the same way they would charge for a human?

Probably not. “Named user pricing will come under pressure, thereby significantly jeopardizing SaaS providers,” Gartner analysts wrote in the report. “The implications in this scenario are significant and far-reaching. The software provider is at risk of losing most of its users.”

By 2025, 40% of software that is currently priced on a per-named-user basis is expected to transition to other pricing models to prevent losses, Gartner said.

The advent of AI is expected to bring more positive developments, too. Virtually every major cloud provider and SaaS startup is baking AI into its offerings, creating a sort of “AI as a Service” market segment.

Customers can expect more intuitive, voice-controlled user interfaces  as well as tailored and increasingly useful search results thanks to big data and machine learning. Heiser pointed to the example of Adobe Sensei, which is baked into Adobe’s cloud-tethered apps and uses deep learning to recognize faces, edit photos and search for, say, all photos in your collection that include a barn.

In addition, more SaaS providers will take advantage of plug-and-play machine learning APIs offered by major tech companies, such as Google and Microsoft, said Rhett Dillingham, a senior analyst covering cloud services for Moor Insights & Strategy. He said the successful SaaS providers will be those that quickly deploy AI to reinvent the customer experience with speech, better search and better recommendations.

“It will help sort the winners and the losers, Gillingham said. “The lesson of digital disruption is that (the best) user experiences win,” he said. “And the SaaS vendors that deploy AI through machine learning will be set up to win in 2018 and going forward.”

The importance of branding for software companies – Newsletter July2021